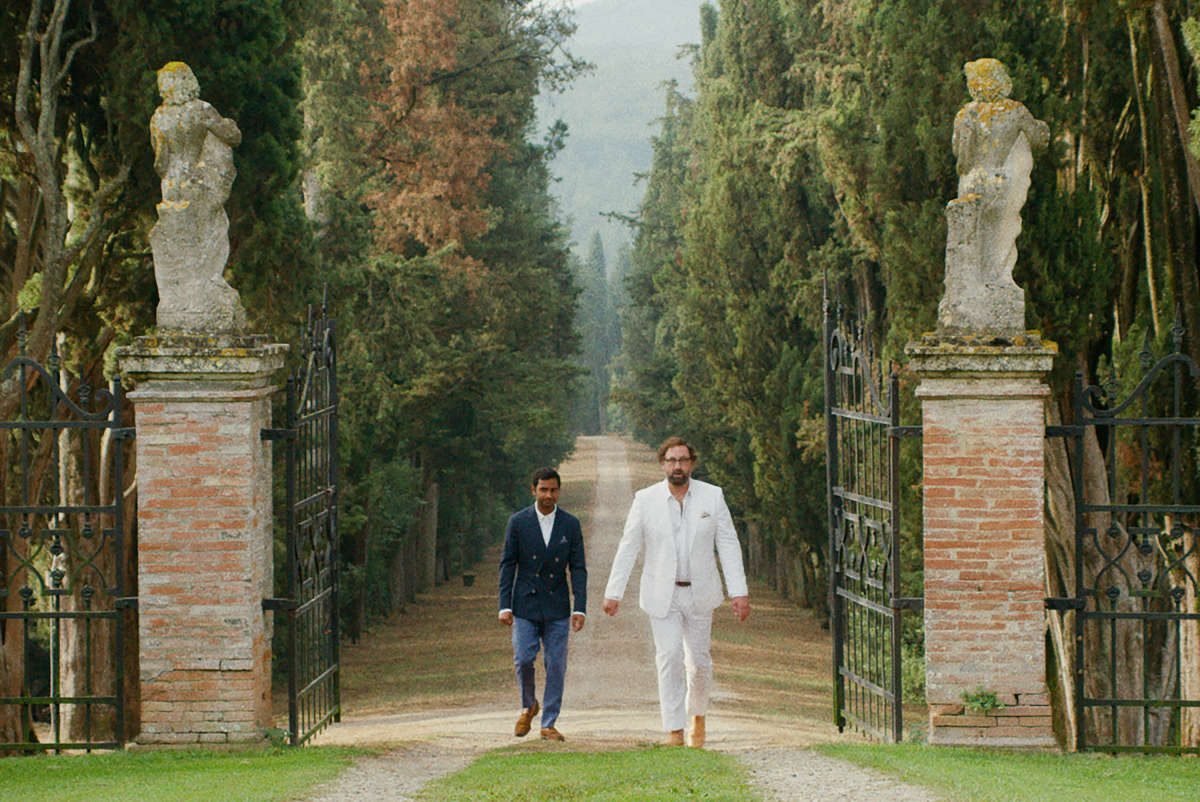 “Master of None” is an American comedy-drama web television series developed for Netflix by Aziz Ansari and Alan Yang. Anziz is probably most famous for his role in “Parks and Recreation” (where he played Tom Haverford).

I wanted to find out if season 2 of the show had any measurable effect on the volume of tourist interest for the two Italian cities where some of the action takes place: Modena and Pienza. Additionally I decided to uncover the name and location of the villa where the wedding scene was shot, if only for those lovely gates!

The first 2 episodes of the second season take place in Northern Italy, specifically in the city of Modena (Emilia-Romagna region) and in and around the town of Pienza (Tuscany region).

Regular readers of my blog might have noticed that I’ve written about a couple of places in Tuscany (my posts about Italy), so I was especially glad to watch these 2 episodes.

Imagine my surprise when I heard Aziz’s character promote the town of Pienza like so: “Pienza is supposed to have the most amazing pecorino cheese“.

Yes! They DO have the best pecorino cheese (as long as it really comes from Pienza).

I posted about Pienza last year, which is the first hill town that we have visited on our first trip to Tuscany (back in 2014, when my wife was pregnant).
I’ve also posted about Podere Il Casale, an organic farm in Pienza where you can taste pecorino (unpasteurized sheep milk cheese).

Locations in City of Modena

An ancient town, and seat of an archbishop, it is known for its automotive industry since the factories of the famous Italian sports car makers Ferrari, De Tomaso, Lamborghini, Pagani and Maserati are, or were, located here and all, except Lamborghini, have headquarters in the city or nearby. One of Ferrari’s cars, the 360 Modena, was named after the town itself.

Modena is also known in culinary circles for its production of balsamic vinegar.

Osteria Francescana is rated with three stars by the Michelin Guide and holds the first position on the Italian food guide l’Espresso – Ristoranti d’Italia with a score of 20/20.

Locations in and around Pienza

As I mentioned earlier, Pienza was the first hill town that we ever visited in Tuscany. It is a very good starting point, especially if you don’t want to walk around all day.

This is a wonderful shop in Pienza.

In my post about Pienza I have discovered a photo of this exact same cheese stand! Here it is:

It took me about 15 minutes to track down the villa where the wedding scene was shot. The same wedding venue is presented on multiple destination wedding websites under different names: Il Colombaio, Monteriggioni Estate, etc. These wedding agencies work for a commission, so it is a common practice to use made-up names for the villas in their portfolio.

The official name of the villa is Borgo Stomennano. Full address is: Localita Stomennano, 53035 Monteriggioni, Siena.

I reached out to them and asked for confirmation of this fact, and I quickly got the following response via email:

Yes, the wedding has been filmed at Borgo Stomennano the past August.
Mr. Ansari was here in May 2016 as a guest of a wedding held at Stomennano and he decided to have one episode of Master of None here.

Even without the official confirmation it was now easy to find members of the cast on Instagram tagged in this location. Here is real Arnold and the fake Arnold:

Even though the show didn’t highlight a lot about this villa, I’m sure that some people would want to have their wedding in the same place as “that show”. So in the future there will probably be a lot of people with photos like the one below.

Did the Show Bring Search Traffic to Modena and Pienza?

Netflix is the world’s leading internet television network with over 100 million members in over 190 countries.

Season 2 of the show came out on May 12, 2017. The same week a lot of websites posted articles about the shooting locations for Italy scenes. Most likely this information was sent out in the promo press pack, as the websites basically spin the same info without a lot of variety.

Let’s see if this exposure (mostly in the United States) brought a change to the search traffic for our main 2 keywords: Modena and Pienza.

Wow! I was surprised to see absolutely no visible change in the Search Trends for these 2 keywords, especially considering that the show came out right when High Season starts for the Italian tourism industry.

Granted it has been only 31 days since the show came out, but I think most views occur during the first week since release.

I would love to hear from people working in these cities or even at these exact locations. I wonder how many people will drop by because of the show. As it stands right now, it doesn’t look like these venues use the show in their marketing efforts. Maybe something in their contracts with the producers prevents them from doing that, or maybe they just don’t think it is worth addressing :)

P.S. I couldn’t stop thinking about how much Season 2 of “Master of None” reminded me of “Louie” by Louis C.K., especially the “New York, I Love You” episode.

Apparently I’m not the only one who felt this way. Richard Lawson, columnist for Vanity Fair had some interesting things to say in a piece called Master of None Season 2 Is Delightful, but Not Deep.

“Like C.K., Ansari and Yang love a good ramble. They allow asides to turn into entire episodes, experiment with style and aesthetic, often nodding to art-house cinema of old. It’s fun viewing, not knowing where each episode of the series [..] is going to take us.”
– Richard Lawson

If you haven’t seen the show yet – give it a try, it is streaming on Netflix.

4 Replies to ““Master of None” Season 2: Locations in Italy (incl. Wedding Scene)”